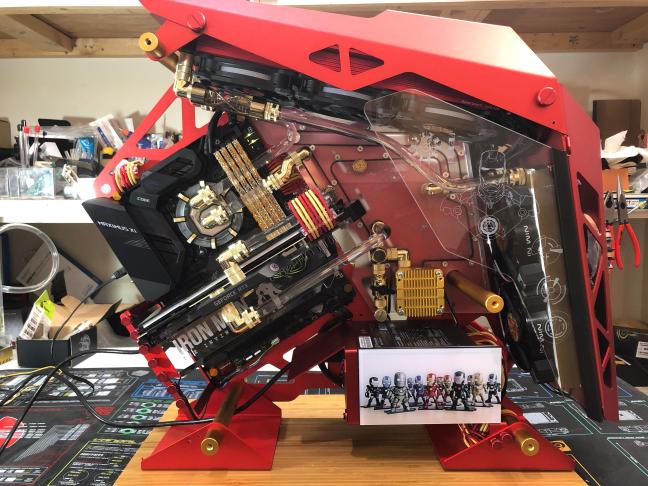 The wild monstrosity you feast your eyes on right now, costs thousands of dollars to build. That’s right. For the cost of this computer you could buy a mid-range car, invest in a year’s education, or even buy 10 premium iPhones. So what, you may inquire, is so special about this computer? Why would anyone in their right minds spend their time and money building their own computer, when they could simply buy that old Dell machine from the local electronics store? And how could it even possibly be better than the latest shiny steel MacBook Pro that Apple just announced?

For example, here is the 15″ MacBook Pro, coming in at a staggering $2400 dollars. And here are it’s specs.

And here’s a custom PC, with comparable or better specs. Tallying the individual costs of parts lands us just shy of half the price of the MacBook Pro.

Device-makers are incentivized to keep consumers on a constant upgrade schedule. It is because of this that we live in a world of planned obsolesence. Every manufacturer implements their own tactics and methods – but the end goal is the same: to enforce an artificial life span on your products, making them obsolete after this stipulated time.

Fewer and fewer companies each day give you a) spare first-party replacement parts, or b) easy accessibility to the internals of your own devices. This means each day it is harder to repair or upgrade your own devices. Increasingly, companies are actively attempting through anti-consumer measures to limit the enforcement of the Right to Repair.

With a PC, the keys to the kingdom are in your hand. Broken case fan? No problem, just order a new one for 15 bucks off of Amazon. Experiencing power supply isssues? Just switch your PSU, or get an Uninterruptible Power Supply. The troubleshooting opportunities are endless- and they will save you a buck.

The possibilities extend beyond just repairing. Since every part is under your control, you can just simply upgrade selective parts of your system as and when you require. Whether it be enabling greater multitasking by downloading more RAM, or enabling yourself to play the latest game by upgrading your GPU- nothing is impossible.

Say you are a professional photo editor but you’re on a budget. You can probably skimp on a high-end GPU, but you really want a multi-threated CPU. You need super-fast storage only for the projects you are working on, which are generally never larger than 30GB in size, and for the rest of your workload, you don’t mind slow sequential storage, so long as you can store everything. Oh, and your monitor must have decent color accuracy, you’d like a mechanical keyboard, and you need an ergonomic mouse for those long hours. You are a heavy multi-tasker…

Try fitting those demands into your regular 13” laptop. Or even a pre-built desktop computer. Chances are, you’d never find something just perfect for your needs, and you’d end up way over your budget. But with a PC, you select the components, and you allocate the budgets, so you can make the exact set of trade-offs that you want.

The same goes for aesthetics. Most laptops are now sleek black boxes, with little to no variation between them. The same can be for pre-built desktops, except that those somehow look even worse. But with a PC, you can choose everything, from the way the case looks, to how it all lights up, down to the color of each individual part. And that’s not even delving into the crazy crazy world of case mods and spray painting and whatever it is these creative nerds do with their computers.

It’s a hobby and a community

The custom PC building community has grown by leaps and bounds in both quantity and quality since it’s nascent days. It now encompasses YouTube channels that are small businesses themselves, tech journalism websites, PC part selection websites, and of course the multiple vast online forums and subreddits. And although gaming communities are reviled for their famed toxicity- these forums are full of knowledgable and helpful individuals – ready to answer your questions along the way.

The PC gamers even have a name for the community: the PC Master Race.

Knowing how a computer works in the 21st century is somewhat of a life skill – like being able to repair your car or radio once was. Building your own PC means that you will have a) a more structured academic understanding of the various parts of any computer system, and more importantly, b) an organic understanding of how it all works together to influence your overall computing experience.

The best thing about this is that these skills will last you through your life- whether it be buying a mobile phone, tablet or laptop, enabling you to make informed decisions about all future electronics purchases.

It’s not that hard

As much as we like potraying ourselves as the shady underground geek indie grassroots DIY hacker ethos community, PC building isn’t even that hard anymore. A popular joke within the community is that PC building is basically “lego for adults”.

With a single 15 minute tutorial, anyone can build their own computer in minutes. And that’s not to mention that countless trouble-shooting guides and community forums on the Internet to help you deal with every possible mistake you could make along the way.

a) Control over hardware

As Edward Snowden writes in Permanent Record, we now live in a technological tyranny of ignorance:

“Ours was now a country in which the cost of replacing a broken machine with a newer model was typically lower than the cost of having it fixed by an expert, which itself was typically lower than the cost of sourcing the parts and figuring out how to fix it yourself. This fact alone virtually guaranteed technological tyranny, which was perpetuated not by the technology itself but by the ignorance of everyone who used it daily and yet failed to understand it. To refuse to inform yourself about the basic operation and maintenance of the equipment you depended on was to passively accept that tyranny and agree to its terms: when your equipment works, you’ll work, but when your equipment breaks down you’ll break down, too. Your possessions would possess you.”

No longer do you have to depend on large corporations to configure and repair your computer. You need nothing more than a friendly Internet user and a screwdriver – and voila, you just saved a trip to the local Genius Bar, or frustrating hours on the Dell helpline number.

Building your own computer grants you agency over your own digital life- a sort of freedom to control your own device.

b) Control over software

As covered earlier in this blog, the digital privacy of civilians is under attack from corporations and governments. Building your own computer allows you to bypass these intrusive surveillance measures that companies may or may not have installed on your computer. And before you dismiss this as paranoia, listen in to Edward Snowden again:

“I was reminded of what is perhaps the fundamental rule of technological progress: if something can be done, it probably will be done, and possibly already has been.”

Run away from locked BIOS’s and delayed security patches to glaring issues. Run away from propietary operating systems and god knows what malicious code companies implement under the hood. Run away from not being able to overclock your own processors, or changing the refresh rate of your monitor.

And enter the world of total control and customization. Modern motherboard BIOS’s allow you to change everything from your fan curve to the clock speed and multiplier of your CPU. Boot into as many operating systems as you want, and install security patches as and when they arrive exactly when you want to- not hidden somewhere deep underneath some intrusive OS update.

Footnote: None of this is to say that there aren’t greedy corporations wanting to suck your soul in this space either. Anyone who’s followed the tech industry for a while knows the kind of shady shit companies like Nvidia and Intel and AMD pull all the time. But the fundamental difference is this: these companies control only a single, limited aspect of your digital existence: one component of your device. Furthermore, in this market where specs are everything, margins are low and customers are highly educated, companies are forced to listen to customer demands and respond to journalistic pressure.
There are many glowing examples in just the recent years of companies shutting down predatory schemes and offering better prices, simply because a few major YouTubers got behind the cause. Such examples include the closure of the Nvidia GeForce Partner program, the backlash Verge Media faced after publishing inaccurate and potentially dangerous PC building instructions causing them to pull down the video, and finally widespread criticism of the Intel-Principled Technologies whitepaper controversy.

Finally, journalism in this industry is top-class. Almost all major figures are passionate and knowledgable about technology, and extremely transparent in the running of their business. Many go as far as to disclose their sources of income, criticize even their sponsors for their misdeeds, and publicly denounce unethical practices like “paid reviews”